It's done. 185 days after the field rolled out for free practice at Imola, the 2022 Fanatec GT World Challenge Europe Powered by AWS season concluded at Circuit de Barcelona-Catalunya.

The finale was a nail-biter, with Iron Lynx seemingly set to snatch both Endurance Cup titles away from Akkodis ASP. But the Mercedes-AMG squad was saved by an unlikely ally, as Porsche outfit Dinamic Motorsport took race victory and denied Ferrari a third successive drivers' crown in the process

Elsewhere there was heartbreak and high drama in the Gold Cup class, a final flourish from the Silver Cup standouts and a trio of title celebrations in Pro-Am. For the final time in 2022, these are the stories and stats from the paddock.

With the #71 Iron Lynx Ferrari finishing second, fifth place was enough to seal the Endurance Cup teams' and drivers' titles for Akkodis ASP. Sixth would also have done it, though in this case the drivers' championship would have gone to a tiebreak.

Marciello earned his fourth Fanatec GT title on Sunday, adding the Endurance crown to the 2018 Sprint Cup and a pair of overall championships (2018 and 2022). He is one of only four drivers to have earned four titles: the others are Lamborghini ace Andrea Caldarelli and the Team WRT pairing of Dries Vanthoor and Charles Weerts.

Dinamic Motorsport won the race with the kind of performance that we have come to expect from the Italian squad. The #54 Porsche ran third throughout the first two hours and played its hand at the final pit stop, undercutting its rivals to vault into the lead. Once there, the car had enough pace to maintain its advantage.

Though it was not an obvious favourite, Dinamic did not hide its speed. Matteo Cairoli set the fastest time of the weekend, posting a 1m43.955s in the final segment of qualifying. He was run close by Nicolai Kjaergaard (#159 Garage 59 McLaren), who was just 0.001s shy of the Italian in Q3.

This was Porsche's ninth overall victory, moving the Stuttgart marque clear of BMW and to within one win of Audi Sport's record of 10. Porsche also matches Ferrari in having taken at least one race victory in each of the past four Endurance campaigns.

Klaus Bachler and Matteo Cairoli both earned their third Fanatec GT Endurance wins on Sunday. Bachler's previous triumphs both came at Monza, in 2019 and 2021, while Cairoli won at the Nürburgring in 2020 and Monza in 2021. Alessio Picariello scored his first overall win on Sunday.

Second may not have been enough for Iron Lynx, but it was still an impressive display at a track where the Ferrari squad struggled for pace last term. Prior to the #71 crew's pole on Sunday morning, the brand's best qualifying at Circuit de Barcelona-Catalunya was sixth in 2021.

Making his first appearance of the season, Alessandro Pier Guidi was in stellar form during the opening stint, though a slow puncture towards the end of the hour forced Iron Lynx to box earlier than they would have liked. Jules Gounon reported encountering the same problem during the middle stint in the title-winning Mercedes-AMG.

Emil Frey Racing gave Lamborghini its best finish of the season by taking third. Local ace Albert Costa was the standout, hunting down and passing the #71 Ferrari during the middle hour. The result also ensured that Jack Aitken scored his maiden Endurance Cup podium.

Team WRT signed off its partnership with Audi by finishing fourth on Sunday. The #32 car ran a quiet race, falling away from the podium contenders but breaking well clear of the #88 Mercedes-AMG. In the Endurance Cup, the final account for the partnership is three overall drivers' titles, five teams' titles, and seven race wins, including a pair of triumphs at the TotalEnergies 24 Hours of Spa.

BMW did not have front-running pace at Barcelona, but the #50 ROWE Racing entry did achieve something very significant. The young trio of Dan Harper, Max Hesse and Neil Verhagen went the distance by completing all 1,004 laps, making them the only crew to achieve this feat in 2022.

By qualifying fourth overall with its #159 McLaren, Garage 59 secured the best starting spot this season for a Silver Cup car. It was also the best for any McLaren runner during the 2022 campaign.

The #159 ran in the class lead for much of the race, only for Nicolai Kjaergaard to be passed by the #30 Team WRT Audi of Thomas Neubauer during the final stint. This gave the #30 crew of Simmenauer/Goethe/Neubauer a third class win of 2022. They ended the season 49 points clear of their closest rivals, the biggest winning margin in this season's Endurance Cup.

The only Silver Cup title to be settled at Circuit de Barcelona-Catalunya was the Fanatec GT World Challenge Europe Powered by AWS teams' championship. Team WRT entered the weekend with a sizeable advantage over fellow Audi Sport squad Attempto Racing and sealed the title with another victory.

The Gold Cup was settled in dramatic fashion. Iron Dames were on course for victory and the class crown, with Michelle Gatting delivering an especially strong performance to take the lead during the middle stint. A gearbox failure during the final hour dashed their hopes in cruel fashion.

Instead, it was McLaren squad Inception Racing that clinched the title with its trio of Iribe/Millroy/Schandorff. Brendan Iribe arrived at the circuit at 07:30 on Sunday morning, having flown overnight from the United States. The American was contesting the final round of the IMSA championship, where he also collected a class title.

The Gold Cup win was decided by a final-lap collision between a pair of Mercedes-AMG runners, with the #57 Winward Racing machine tipping the #5 HRT entry off the track. The inevitable 30-second penalty arrived a few hours after the race, sending the #57 Mercedes-AMG down the order.

As such, the #112 JP Motorsport McLaren – which had run third in class at the start of the final lap –took its maiden Gold Cup win. Patryk Krupinski, Maciej Błażek and Norbert Siedler shared the Polish squad's car at Circuit de Barcelona-Catalunya.

Three different teams were celebrating Pro-Am championships on Sunday evening. AF Corse took the Endurance Cup drivers’ crown with its trio of Machiels/Bertolini/Costantini. For series stalwart Machiels, this was a third class championship and came 10 years after he sealed his second. AF Corse also earned the overall Pro-Am teams’ crown.

SPS Automotive Performance won the race with its #20 Mercedes-AMG of Pierburg/Loggie/Baumann to seal the Endurance Cup teams' title. This was the crew's third win of the campaign, suggesting that the championship battle would have been very close but for its decision to contest the Bronze Cup class at the TotalEnergies 24 Hours of Spa.

Garage 59 driver Miguel Ramos earned a second consecutive overall Pro-Am title. The #188 McLaren suffered a difficult race after unavoidable contact on the opening lap caused significant damage, requiring a long spell in the pits. Ensuring that the car finished was key to Ramos taking the crown, and the Garage 59 crew was equal to the task.

Kelvin van der Linde missed the event due to health issues. As an Audi Sport factory driver, this was scheduled to be the South African's final outing for Team WRT. His place was taken by Ricardo Feller, who previously drove in three Sprint Cup events for WRT in 2018.

With its Audi relationship complete, Team WRT began testing the BMW M4 GT3 on Monday at Circuit de Barcelona-Catalunya. The Belgian squad has not officially confirmed its plans for next season but is widely expected to be on the Fanatec GT grid with BMW machinery.

The Fanatec GT World Challenge Europe Powered by AWS season may be over, but there are still a handful of events left that are set to feature some of its competitors. Marciello, Gounon and Juncadella will be among the drivers on the Intercontinental GT Challenge Powered by Pirelli grid for this weekend's race at Indianapolis (6-8 October), while the series will run a final round at Yas Marina on 9-11 December. A number of teams and drivers will also contest the FIA Motorsport Games (26-30 October), which features a pair of GT categories as part of its second edition.

But for Fanatec GT World Challenge Europe Powered by AWS that really is it for 2022. Preparations for next year are already underway, with pre-season testing scheduled to get underway 154 days from now at Circuit Paul Ricard (7-8 March). 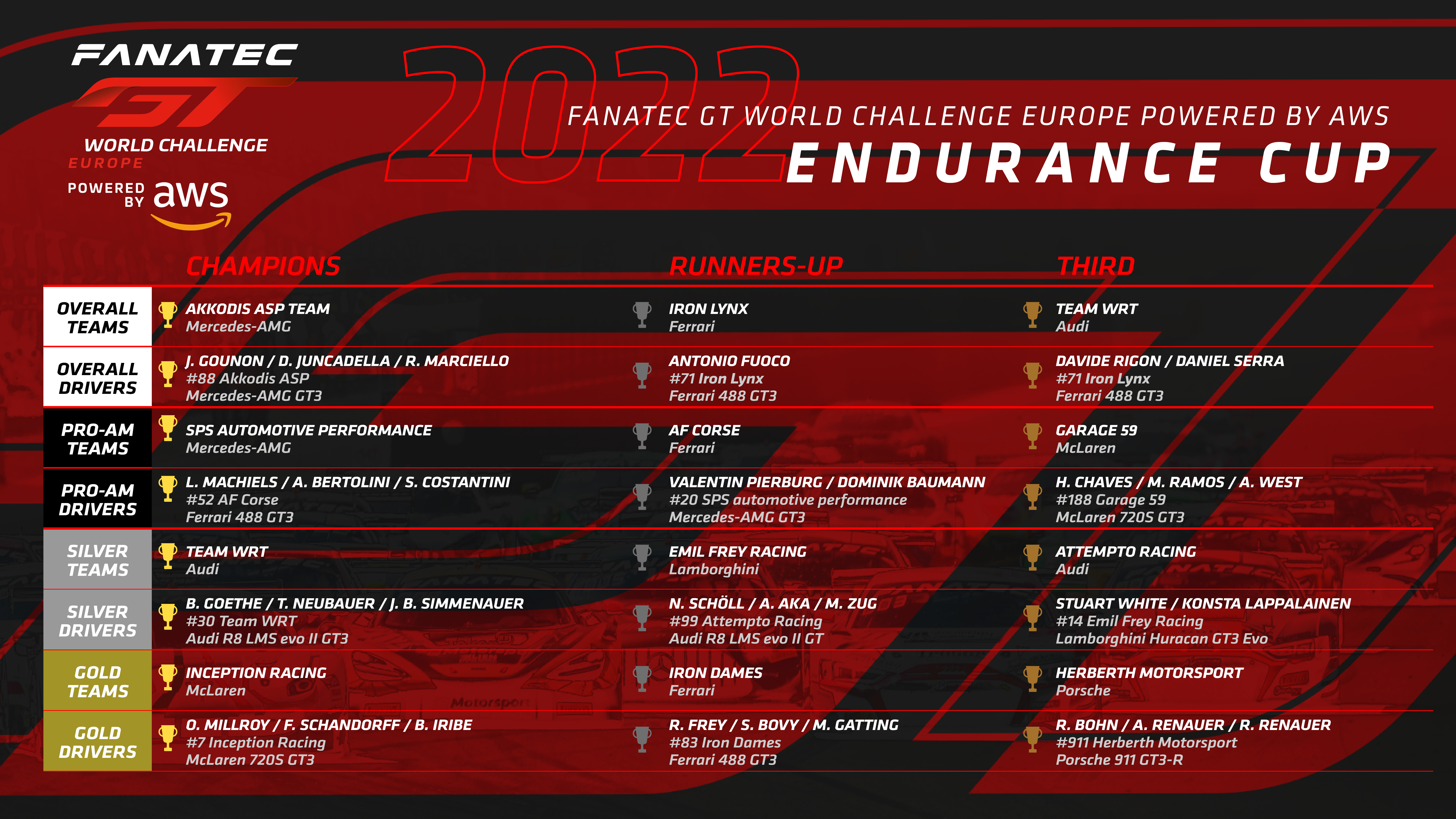 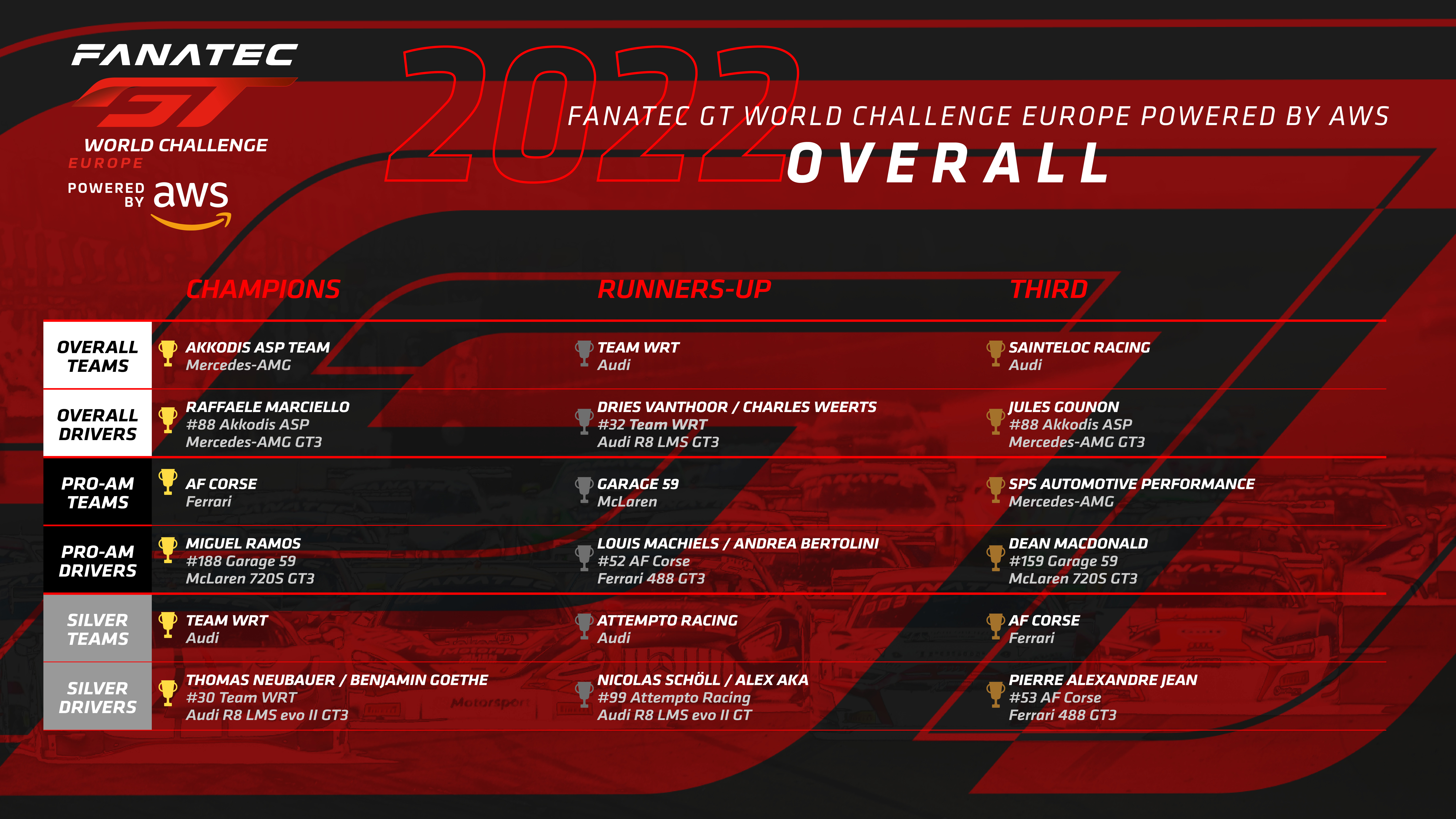